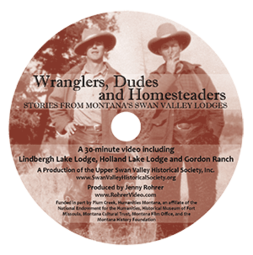 To order the Wranglers, Dudes and Homesteaders DVD visit our Projects page >>

The USVHS hosted the premiere showing of Wranglers, Dudes and Homesteaders, a 30-minute video capturing the magic of the Western lifestyle as it carries one back to the early years of Montana’s dude ranches, with stories and photos of that bygone era from Lindbergh Lake Lodge, Holland Lake Lodge and the Gordon Ranch.

Wranglers, Dudes and Homesteaders, a production of the USVHS, is part of The Montana Experience: Stories from Big Sky Country and is featured on the Tourism Montana website. The film was directed and produced by Jenny Rohrer of Rohrer Film & Video. The film was funded in part by Humanities Montana.

The Film, Fiddlers & Fun event was held at the Swan Valley Museum & Heritage Site and was attended by nearly 150 people, who also enjoyed a barbeque dinner by Swan Valley Cafe and a performance by the Big Sky Fiddlers Association from Kalispell, Montana. An Open Mic session followed. 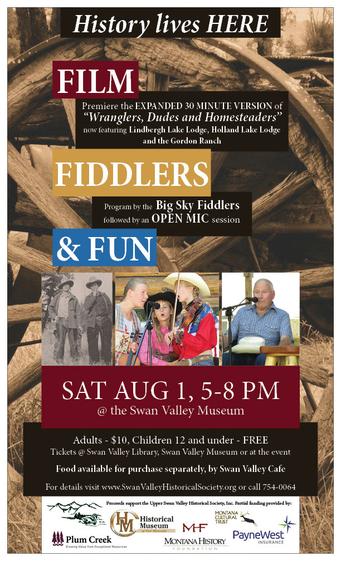